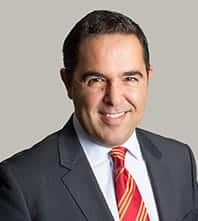 Nadim Barsoum has been practicing law for over 15 years, with an emphasis on personal injury claims, insurance litigation and civil litigation. Nadim joined QTMG Personal Injury Lawyers in 2012 after spending more than ten years as in‑house counsel for some of the largest publicly traded companies in Canada.

Nadim has appeared before all levels of court in Ontario and before various administrative tribunals. Most notably, he also has extensive experience on the tennis and badminton courts.

Nadim is a member of the Law Society of Upper Canada and a former member of the Quebec Bar. Nadim is a graduate of Ottawa University where he earned two (2) Law degrees (Common Law and Civil Law) and a Bachelor of Business Administration.

When Nadim is not in court or on the court, he runs around his two young boys who are avid soccer and tennis players.  He also lectures frequently to his children on a variety of subjects.

Nadim is fluent in English and French and he can also serve clients who speak Arabic and Spanish.

Being an active member of his community is a priority for Nadim.   He has volunteered for many non‑profit organizations in Ottawa and Montreal (Big Brother of Montreal, Gloucester Emergency Food Cupboard, Tix for Kids, Rogers Cup Tennis Tournament).